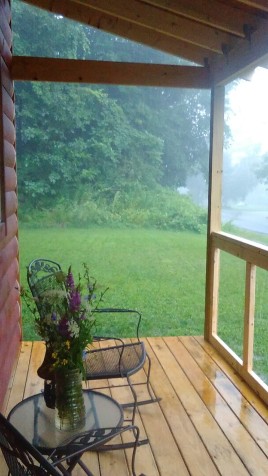 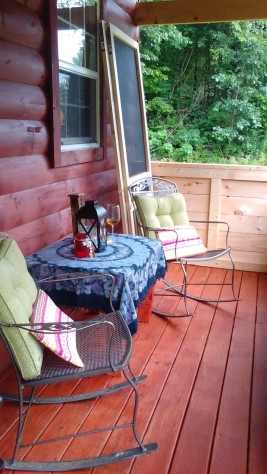 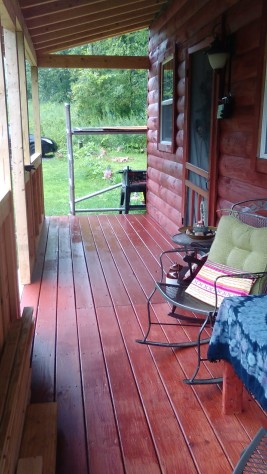 A long time follower of the Tiny House movement and minimalism, “the intentional promotion of things we most value and the removal of everything that distracts us from it,” Tina M.E., Author, Poet and freelance writer embarks on the dauntless task of minimalism and the pursuit of a family Legacy for her children.

Being a lifelong resident of the Connecticut shoreline, manicured lawns and financial status was the norm. The decision to downsize and relocate was initially not by choice, as many hardships had befallen the author, including job loss, divorce, domestic violence, hunger, house foreclosure and eventually homelessness. Acquiring land in the Adirondacks seemed like a move upward, along with minimalism and work as as a farmhand, bringing the Tiny House journey closer within reach.

The Tiny House was built by a talented young Amish gentleman who goes by the name of Ezra, working diligently for three years to complete the project as communication was close to impossible with most of the planning and designing done by drawings through the mail and occasional general store phone calls. Many years of blood, sweat and tears went into this project, with the final details and a sense of “whimsy” completing the Tiny House.

The quaint, whimsical two story knotty pine cabin was a vision in the author’s mind for years, planning the design and layout, right down to the catwalk landing joining the upper lofted bedrooms. Making allowances for storage above and under was a slight challenge, but as they say in minimalism, “less is more.” The quarter turn staircase is the highlight of the Tiny House, showcasing the author’s art wall and photography.

The familiar quote by Robert Frost comes to mind, “Two Roads diverged in a wood, and I, I took the one less traveled by and that has made all the difference.” These words are very close to home for Tina, who lives on the forest lined street that goes by many names, and where beyond the Tiny House lies a fork where two roads, do in fact go their separate ways.

In addition to the simplicity of country living and the new addition of a cast iron wood burning stove, the Tiny House has a few other hidden gems. A fresh Artesian Well flows crystal clear water, abundantly spilling over into a rock adorned pool, now housing a family of frogs.

During planting the Author unearthed a tombstone with an inscription of the original property owner’s name, dating back to 1910. Unbeknownst to the Author at the time of her novel’s original publication, that very same name, Levi was used as a character in her novel Dantalion Of The Goetia: Legacy, a YA paranormal fiction story about an immortal angel who had fallen from grace and was condemned as one of seventy two hosts of demons from an ancient 17th century grimoire. Her use of historical fiction settings for the book consists of a Courtyard-turned religious site listed on the National Register of Historic Places by the U.S. Department of Interior, along with a secondary setting taking place on and around Yale University and its infamous secret society Skull and Bones and the ‘Tomb’.

Another of the Author’s work has roots in the Adirondacks, when she came across a stunning waterfall which later became the cover for her first book, The Silent Serenade, an inspirational collection of poetry and photography taken around the world of some of nature’s most beautiful places.

Tiny House Tale
All our steps have led to this
Solemn demise at the end of the road
A Tiny House with Winter’s chill
It’s frozen drifts gleam on the snow.
Waiting for us so long it seems
We’ve paused our lives
We’ve swept our dreams
Beneath the dusty ashen stair
But soon they’ll know what brought us here
A breath of hope so crystal clear
Water streams like angel’s tears.
The windows glow a welcomed light
Chasing shadows beyond the night.

Recipient of Editor’s Choice Award for Outstanding Achievements in Poetry, a freelance writer, journalist, past advocate for young adult writers in her community, and long time follower of the Tiny House Movement, minimalism, and all things whimsical, Author Tina M.E. invites you to follow her Tiny House Tale and books on her website https://tinyindiewhimsy.com.

Proud tiny house movement participant, indie author of The Silent Serenade, an inspirational collection of poetry and photography taken of some of nature's most beautiful places in t he world, and author of the Dantalion Of The Goetia series, a fantastical paranormal romance derived from an ancient 17th century grimoire referred to as The Goetia, whereby Dantalion, a condemned demon is mistakenly summoned by a mortal girl, creating an unexplainable relationship of love, obsession, and redemption. View all posts by tinyindiewhimsy

This site uses Akismet to reduce spam. Learn how your comment data is processed.